Any questions pertaining to the above-mentioned, please reach out to me via email: bryan.southamptonicerink@gmail.com 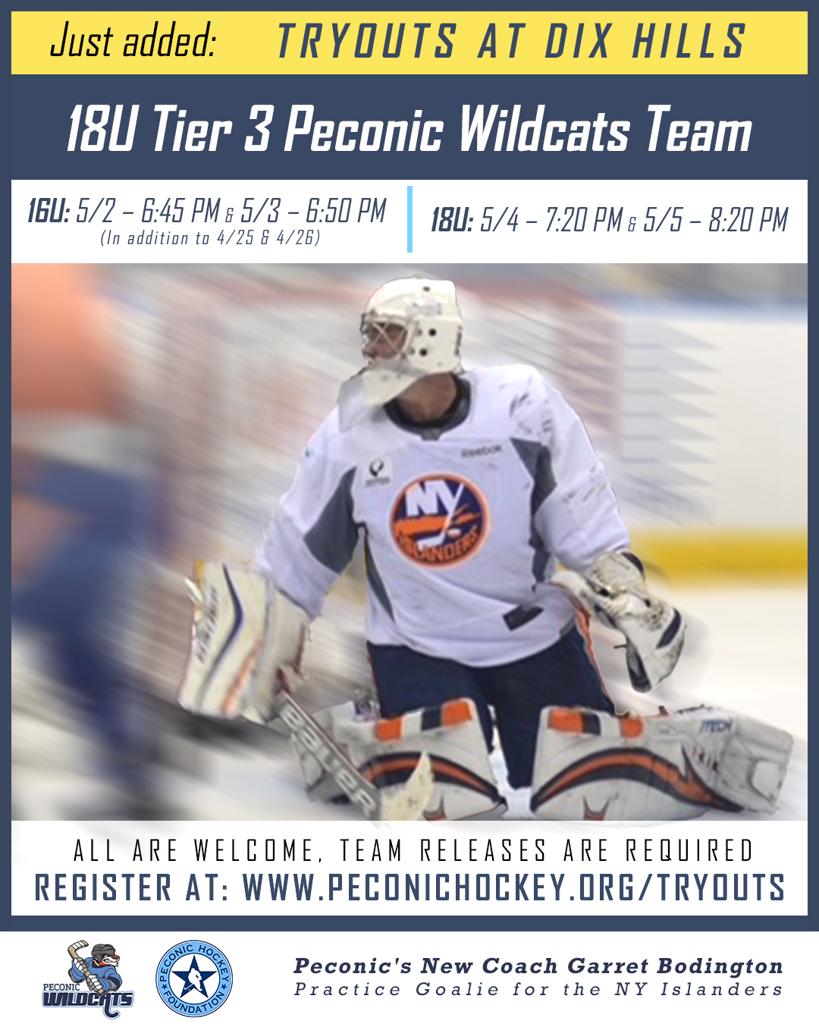 Who are the Peconic Wildcats?

The Peconic Wildcats are a Tier III tournament-bound travel hockey organization under the umbrella of USA Hockey and the New York State Amateur Hockey Association. Quite simply, we are a travel hockey club.

What is the Wildcat's home rink(s)?

We use Southampton Ice Rink and Buckskill Winter Club as our home. Obviously, with these two locations being seasonal rinks, opening in November & December, we do fill in the time during August, September, and October at rinks outside of this location. For 2021-2022 we used Dix Hills, The Rinx, and LI Sports Hub. Once Southampton opens up, the team switches to practices there, and then once Buckskill opens up, we play home games there.

Where does the team travel to?

Typically, most of our games are on Long Island. Between Suffolk & Nassau County. The furthest any of our teams traveled to this season for one single game was Mamaroneck, NY (Westchester). Our teams will participate in 2 tournaments throughout the season which will be out of state. This past year was Pennsylvania twice.

What is the length of the season?

Our season starts with tryouts in April. We then pause with Wildcats hockey until August, where we will begin practices once a week (on the weekend). The games start in September. The season will end in mid-March.

How competitive are these teams?

We are a new travel organization. Meaning, we have a lot of new travel-level players in our organization. For instance, this past season, over 80% of our players had never played travel-level hockey before. That number will decrease as the years go on and outside interest will increase. Players within our organization play a lot of hockey. Aside from Wildcats, many of our players participate in house leagues, high school hockey, and other programs. Typically a Wildcats player is on the ice anywhere from 5-10 hours a week. We have seen rapid development in our teams and in our players.

How much time should I expect to invest?

What is this going to cost me?

These are rough, but fairly accurate numbers:

*There are payment plans available.

We did basically zero fundraising this past season. That will change as a lot has changed with the COVID situation. We will have plans to fundraise this summer. A fundraising committee will be put in place after tryouts.

When is the tuition due?

We will ask for a deposit (amount TBD) right after tryouts. This is necessary to pay the league to which we belong and to secure ice for the start of our season. We will then come out with the payment schedule.

We want to make sure that every player who makes a Wildcats team is given the opportunity to play. We understand that financially, all families have different situations. If you are hesitant, because of the costs, please reach out to me to discuss this. There may be options for you.

You must register for tryouts and pay the tryout fee, even if you cannot attend. Tryout registration will be open on Monday, March 14th, and the link will be sent out to everyone.